Luther B. Easley was born January 14th, 1894 near Cartter, Illinois into the family of Robert M. and Mary L. Easley. As a youngster, Easley fished in Skillet Fork and enjoyed picnics at Rose Lake. The family moved to Salem in order that the youngsters would be closer to a high school.

With the call for volunteers to fight in the World War, Easley responded and enlisted on September 20, 1917. He was assigned to Company K, 32nd Division, 126th Infantry, enlisting from Chillicothe, Ohio. By January of 1918 he was being shipped overseas, and he reached the front by February 1st.

His friends and neighbors in Salem frequently stopped by the Greider Café where his sister, Allie, worked to see if there had been any recent word. One of his final acts was to send his sister Allie a German cap. Meantime, young Easley was in the thick of battle-he took part in the Aisne-Marne and Defensive Sector battles, and then on to Oise-Aisne.

The Centralia Sentinel of October 3, 1918 announced that Easley had been missing in action since August 28th, and the Salem Herald Advocate of the 11th confirmed Cpl. Luther B. Easley had been killed in action. It was not until May 23, 1919 that the Herald-Advocate reported the specific details- “Cpl. Luther B. Easley was killed August 28, 1918 near Tuvigney, France. Death was instant from a machine gun bullet. The grave was well marked.”

The family could not find peace until the remains of their loved one was brought home to rest in native soil on January 2, 1921 in East Lawn Cemetery. On January 7, 1921 the Herald-Advocate reported: “For the first time in years and certainly the first time for a soldier of the World War, the citizens of Salem attended a funeral for a native of our country killed in action in France. Nearly one hundred former soldiers, marines, and sailors attended in a body to do honor to their fallen comrade. Citizens from all over the country came to pay their respects and attend the last sad rites for this noble young man who laid down his life that the world should be made free. Luther B. Easley comes from ancestors who have lived long in this country. Millington Easley, his paternal great-grandfather came to Marion County in the 1820’s. His paternal grandfather was John F. (Cap) Easley, and his grandmother was a descendant of William Gaston of Revolutionary fame. (His maternal grandfather was Luther Burt for whom he was named.)”

When Salem American Legion Post No. 128 was chartered the comrades were proud to give it the name of local hero. This organization through its good works keeps the name Luther B. Easley alive and honored.

**Excerpts taken from the “What greater love has any man than this?” article by Dr. George Ross

On November 4, 1943, OJ McMackin entertained the Salem Legionnaires and a large number of Legion dignitaries from around the state at 212 E. Main Street, Salem, then the home of the Luther B. Easley Post No 128. One of the speakers, State Commander, Dr. Leonard Esper, spoke of the need for developing a policy for the care of returning veterans. Before the night ended, eight legion leaders would sit informally around a table and formulate a proposal on napkins and scratch paper which would become the GI Bill of Rights. This event has proclaimed Salem as “The Birthplace of the GI Bill of Rights.

The plan was taken to Washington D.C. by Governor Stelle, who was with President Franklin Deleno Roosevelt when he signed it into law on June 22, 1944. The law was officially titled as the Servicemen’s Readjustment Act and was created to assist veterans of active service in the Armed Forces during World War 2. The table the Act was drafted on is on display at the Luther B. Easley Salem American Legion Post No 128 1001 E Main St.

We Are Open To The Public!

Open To The Public! 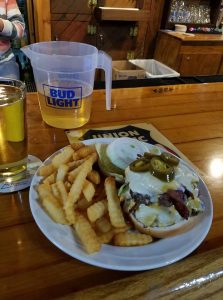